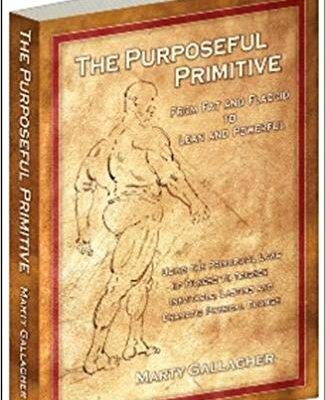 I recently finished reading The Purposeful Primitive.  As a student of the humanities and a health and fitness dilettante, I felt impelled to capture the force of this inspiration in writing. I want to express my appreciation to you for opening the doors to the annals of the history of powerlifting to the common person. Your approach to sports psychology is is unique and comprehensive. I applaud the consummate artistry that you have delivered your teachings and expect to study them for years to come.

For the breadth of the history provided, the specificity of detail of its subject matter, and the efficacy that the fundamentals of training are instilled to the uninitiated, Marty Gallagher’s The Purposeful Primitive is the powerlifting equivalent of Dr. Timothy Noakes’s Lore of Running. The same myth-making methodology that inspired the recreational jogger to try their hand at interval training after introduction to the exploits of Emil Zapotek, and spurred denizens of the weekend 5k onto the grueling path of the marathon compliments Yiannis Kouros’s example is at in the “Iron Masters” portion of this book.

The ascetic discipline of the “Iron Monk” Dorian “The Diesel” Yates; the purity of heart of the Furnas brothers, the inner peace and wisdom cultivated by bodybuilding forefather Bill Pearl, the grit and precision of Ed Coan and Kirk Karwoski. In the pursuit of athletic glory, these men came to embody distinct virtues that represent the high point of character in civilization: self-sacrifice, prudence, loyalty, resilience. These “Hero’s Journeys” will undoubtedly capture the hearts and minds of countless fitness novitiates.

The tales of redemption, determination, transformation, and on occasion, tragedy are physical allegories capturing the arc the human spirit travels in its efforts of self-overcoming. In the first instance, as the soul seeks to transcend the material constraints imposed upon it by the laws of physics and the legacy of evolution; subsequently, the effort made manifest in the spiritual realm as the project to surpass the limitations placed upon the soul by society and culture. The work of the Iron Masters is both a protest against materialism and an act of refusal—a wholesale rejection of the path of least resistance as a historical trend running through the annals of civilization and the complacency of the status quo as a norm governing human societies.

The Purposeful Primitive emerges at an uncanny chronological juncture. This book combines elements of Classicism and Romanticism. Gallagher insists in his Purposeful Primitive manifesto that the book is a harkening back. And it is. This is the work’s Classical aspect. The Purposeful Primitive reaches back to the channel the strength and capture the glory of the primordial father, the King Alpha, the Ur-Chief—a quintessentially Classical gesture. Here we find feats of strength enshrined in the highest tiers of the social hierarchy, symbolized by the archetype of the Warrior King. Samson and Goliath, Hector and Odysseus—all held high court.

The Purposeful Primitive also contains a forward looking promise, a faith in what Ernst Bloch called the “not-yet-become.” This is the Romantic strain.  In contrast to the Primitive Patriarch, the unique path pursued by each of the Iron Masters is thoroughly subjective, totally individual, and ultimately existential. From all cultural backgrounds and social classes—neither constrained by genetics nor upbringing—each master comes into his own, in large part, through a sheer and prolonged act of will. The Iron Master shares a strong kinship with Nietzsche’s Zarathustra, Frankenstein’s Monster,  and  Goethe’s Faust, and would readily quote Coleridge who in “Dejection” sought  “Haply by abstruse research to steal/From my own nature all the natural man.” Yes: The Purposeful Primitive falls squarely within the tradition of Romanticism.

Like a good Classicist, Gallagher fondly quotes Plato’s formula for beauty as symmetry plus proportion. This is beauty classically defined as the imitation of archetypal form. The spirit of physical transformation Gallagher emphasizes with equal force requires a contemporary counterpoint such is found in Post-Structuralist Gilles Deleuze’s claim that “We do not know what are bodies are capable.” That is to say, the transcendence of all pre-established forms, patterns, and definitions in the accomplishment of the hitherto unimaginable—Romanticism at its finest.

Considerations of aesthetic influence and cultural import aside, The Purposeful Primitive is above all else an allegory for what Eastern traditions of philosophy have designated “The Way”; this, made articulate through the triumphs and tribulations required by the practice of resistance training. Archery has historically been the discipline of choice to accompany the spiritual apparatus of Zen practitioners, but Gallagher points the way to iron induced Samadhi. We come to learn that accomplished feats of strength are only valuable insofar as the same focus, concentration, and discipline that allow for a record lift can be applied to the tasks, conflicts and challenges of everyday life. Gallagher quotes Krishnamurti’s counsel to him to “Carry this [flow state, enlightenment, Samadhi, etc. experienced during training] into to day to day life.” Training is thus integrative and holistic. The purposeful primitive transcends mind-body dualisms in good Spinozist fashion by placing the mind in the body and the body in the mind. Accomplishments in one realm are contingent upon and compound gains on those attained in the other.

While this review has focused on the more literary aspects of Gallagher’s enterprise, there is no denying the work’s merit as a blueprint for physical transformation. The three pillars of strength training, cardiovascular exercise, and nutrition are introduced with an admirable depth and clarity. Gallagher defines the principle of “Creeping Incrementalism” and staggers progress for his readers by providing beginner, intermediate, and advanced periodization programs that integrate the three pillars. The options for attaining optimal fitness as outlined in the book are vast. The possibilities for experimentation made available by the vast sweep of the various modalities ensures that those committed to physical transformation will remain engaged, excited, and enthusiastic in their training.

As in all great works of literature, The Purposeful Primitive instigates introspection into the inner reaches of the soul. Nietzsche claimed that if you look long enough into an abyss, the abyss will start looking into you. The same can be said of any great work of literature: the ability of a work to transform any one individual is contingent upon the intensity and focus that person brings to comprehending its meaning and applying its insights. Primitive Prophet, Gallagher has sown the seeds of physical transformation in each person’s heart, whether the wisdom is squandered on paths of stone or reaped in abundance in fertile fields falls to the conscience of each individual who has learned the good news.

Check out the link below to learn more! 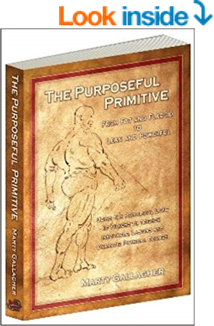 About the Author: Stacy Gallagher

My name is Stacy Gallagher. I have been involved in the fitness industry for over 25 years. I began the fitness education of a lifetime when I met and married my husband, Marty Gallagher. He is both World Champion powerlifter/coach and a prolific writer on all things fitness. I travelled with him to the top bodybuilding and powerlifting events for several years and gained a vast array of training knowledge that I utilized in my own competitive bodybuilding goals as well as with my clients. This was a formative time for me when I established nutrition and training habits that are my foundation.